Hearing loss is common, affecting roughly 15% of American adults, reports the National Institute on Deafness and Other Communication Disorders. But despite its prevalence, only one in five people who could benefit from hearing aids actually wears them, and those who do wait an average of 10 years from the time they first start showing symptoms. This is likely because hearing loss is progressive, and many people aren’t aware they have it until it is severe.

It’s important to seek treatment early, as untreated hearing loss is associated with anxiety, depression, falls and even dementia. Below we review the early signs of hearing loss.

You Can Hear, But Not Understand 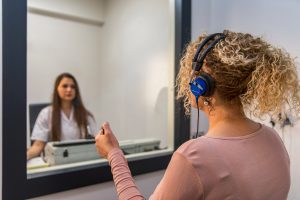 Many people with early hearing loss report that they can hear just fine, but they have trouble understanding what is said. This is because high-frequency sounds like consonants are often the first to go. This can make it difficult to tell whether someone is talking about a “van” or a “fan.” Some of the most troublesome sounds for people with early hearing loss include, “s,” “f,” “th,” “sh,” “v,” “k” and “p.”

It’s also common for people with early hearing loss to have trouble following along with conversations in environments with a lot of background noise, like Empire Cafe. This is because the sounds of other conversations, clanking dishes and kitchen noises can overpower the sound of your conversation partner.

Talking on the Phone Is Difficult

Another notoriously difficult listening situation for people with early hearing loss is talking on the phone. This is because you may be relying on visual cues to follow along and not even realize it. When you’re talking on the phone, these cues – such as lipreading, facial expressions and gestures – are missing.

For more information or to schedule an appointment, call Today's Hearing today.